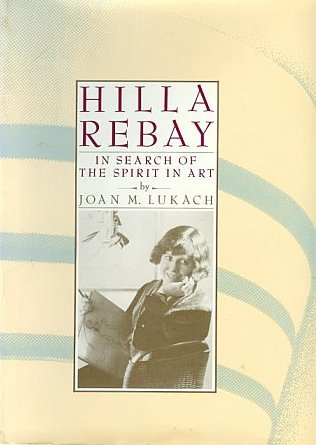 Hilla Rebay: In Search of the Spirit in Art

Hilla Rebay, born the Baroness Hildegard Anna Augusta Elisabeth Rebay von Ehrenwiesen on May 31, 1890 in Strassburg, Alsace, became the great advocate of “non-objective” or non-figurative painting in the United States. As a student in Munich and Paris before World War I, she first encountered modern painting as well as the teachings of Theosophy, and became convinced that art should make spiritually inspired statements. However, it was not until she came to the U.S. in 1927 that she was able to fulfill her mission for art, when she met millionaire Solomon Guggenheim and convinced him and his wife Irene to form a collection of modern masters including Kandinsky, Chagall, Gleizes, Leger, Mondrian, Delaunay, Herbin, Nicholson, Calder, Moholy-Nagy and others that became the basis for the future museum. Rebay and Guggenheim first created the Museum of Non-objective Painting in 1940 in a remodeled space on East 54th Street in New York City, while searching for an architect for a permanent museum. As evidenced by their correspondence Rebay and Frank Lloyd Wright became good friends over the years from 1943 when he began the museum’s design through 1959 when the current Guggenheim Museum was completed. Rebay, Wright and Guggenheim shared a common goal of building a veritable “temple of non-objective art” that would celebrate the achievements of the avant-garde. This is the first book to outline the aims and achievements of Rebay as she played a critical role in the 1930s and 1940s in the emergence of New York as one of the great centers of 20th century art.

A Guide to Historic Hollywood: A Tour through Place and Time
“Two books in one—part narrative history and part guided tour... an eye for detail that does not get in the way of a good story.” --Beth Dunlop, Miami Herald

Hilla Rebay: In Search of the Spirit in Art
First definitive biography of the founding Director of the Solomon R. Guggenheim Museum utilizing her copious correspondence with key art world figures from the first half of the 20th century, from Hans Arp to Frank Lloyd Wright, as well as Solomon Guggenheim.